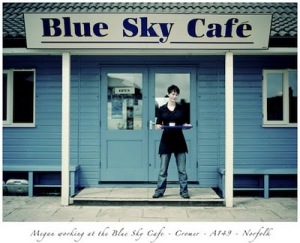 In his recently published memoir, I, Partridge, the North Norfolk digital radio presenter and former BBC chat show host Alan Partridge writes that one of the programme ideas he once unsuccessfully pitched to the BBC was ‘Motorway Rambles’: walking the hard shoulders of British trunk roads with special permission from the Transport Police.

Everyone immediately understands the joke, because spending any more time by the British roadside than you have to is supposed to be an inherently absurd activity. The roadside has long fed into resilient British narratives of nostalgia, loss and self-depreciation. The roadside verge is a hybrid place, neither urban nor rural, in which elegists can contemplate the natural world and lament its encroachment by modern abominations. These anxieties date back to the interwar period, when the rise of the motor car and the arrival of the National Grid meant that houses and factories tended to be built along roads rather than near coalfields. Many observers saw in Britain’s new roadside topography the symptoms of moral degeneration and social crisis. Throughout J.B. Priestley’s English Journey (1934), the roadside serves as a metaphor for cultural change, an augury of a future England made up of Tudor-style chain pubs, lock-up shops and redbrick villas where ‘everything and everybody is being rushed down and swept into one dusty arterial road of cheap mass production and standardized living’.

Before the M1 opened in 1959, there were no service stations and roadside variety reigned. Well-to-do motorists, the so-called ‘gin and jag’ brigade, frequented the road houses, like the Clock at Welwyn on the Great North Road or the Ace of Spaces on the Kingston bypass: lavish hostelries with swimming pools, ballrooms and even polo fields attached. Lorry drivers, meanwhile, swore by the greasy spoon transport caffs, like Kate’s Kabin on the A1 or Bert’s on the A30, fondly known as ‘Bert’s Gone Mad’, after he celebrated 20 years in business in the early 1950s by slashing the price of a cuppa to a penny.

When they first opened, the motorway service stations were stylish places to which young people would drive at high speeds to play pinball and drink Cona coffee, as a more alluring alternative to the only other all-night venue, the launderette. Bridge restaurants were built over the motorways, so that patrons could practise what now seems a strange form of sightseeing: watching speeding traffic. You could even buy postcards from vending machines, and send your loved ones a souvenir of your trip to Newport Pagnell.

By the mid-1960s, though, habit had worn a hole in the service station’s allure. The operators began to cut their overheads, and the service station became a notorious land of unswept floors, sticky tabletops and congealed food slowly expiring under hot lamps. Its awfulness became part of our national mythology, a metaphor for the general malaise of economic and cultural decline. For a certain generation of motorist, the words ‘Newport Pagnell’ or ‘Scratchwood’ are like Proust’s madeleine, instantly conjuring up a host of mental associations: our post-imperial, post-industrial identity crisis encapsulated in a gristly Scotch egg.

Margaret Thatcher tried to solve this with her very first privatisation scheme in 1979, selling off the motorway service area freeholds and allowing private franchises to invest in the sites. This deregulation of the industry got rid of much of the grottiness and transformed the service station into a super-bland corporate space, like a roadside shopping mall. The infamous cafeterias gave way to ‘food courts’, open-plan spaces with communal seating surrounded by counters for McDonald’s and Burger King. Nowadays the service stations are like quasi-airports: clean, efficient and expensive. Even the A roads, which used to be the last redoubt of the transport caff and the Little Chef – that peculiarly British fusion of neo-vernacular folksiness and American diner flashiness – are being colonised by chain-owned service stations, identical to those found on motorways. By the roadside, a corporate-owned monoculture increasingly rules.

But there are some parts of the British roadside that still resist the relentless pull of sameness and blandness, and these improvised roadside shacks are the subject of Sam Mellish’s ongoing photographic project, On the Road. In this he joins an emerging but increasingly distinguished tradition. It was probably Paul Graham who began it all with his photographic project on the A1 (the ‘Great North Road’) conducted during 1981 and 1982, a subject returned to by Jon Nicholson in his 2004 book A1: Portrait of a Road. Until the 1960s, the A1 was the main road connecting the north and south of Britain, but it has now been superseded by the M1 and other motorways, so both Graham and Nicholson seek to represent a partially dying world. It is here that you see drivers sitting alone: lone bikers resting their helmets on tabletops or men in hangdog suits with vacant stares – the sort of sad roadside cafe people whom the philosopher Alain de Botton has compared to the lone figures in Edward Hopper paintings.

Others have joined the pilgrimage by the roadside: the Church of England vicar John Davies in his book Walking the M62; the artist Edward Chell, who combines oil paintings depicting motorway verges on the M6 with text pieces in the form of customised road signs; and the poets Paul Farley and Michael Symmons Roberts in their recent book Edgelands. Like these artists and writers, Sam Mellish demonstrates that spending time carefully observing and recording what goes on by the British roadside is not in fact a remotely Partridgesque activity. It is a worthwhile, enlightening and often touching one.