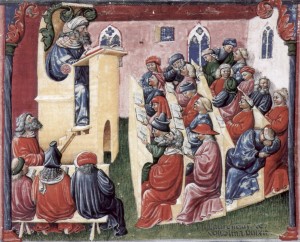 I’ve been reading William Clark’s Academic Charisma and the Origins of the Research University. It’s an interesting if rather unwieldy book about how all the rituals of the university that we tend to take for granted – note-taking in lectures, seminar discussions, reading lists, graduation ceremonies, funny hats and gowns – have developed since the Middle Ages. There are some fascinating details: the Oxbridge tradition of disputatio developed, according to Clark, as a non-violent version of the medieval joust. In case you don’t want to read all of its 662 pages, the index, which I’m guessing Clark compiled himself, gives a pretty good idea of what a strange place academia is and has always been. Here are some edited highlights:

the miseries of scholars

a “work of the night”

power of handshakes at

as indistinguishable from reviews

obsesses about reputation from writings

professors “all too busy the whole day”

to fill the time and end on time

as composed of ‘monstrous’ materials

lectures at Cambridge to empty halls

as indistinguishable from gossip and rumor

chair does not embody expertise

“personae most noble and precious”

salary and a big or inflated name

Not tied to merit (directly)

should have and acquire books and instruments

as slackers at Cambridge

swear oaths about attendance in the Middle Ages

I think my favourite line in Dad’s Army is when Corporal Jones says to Captain Mainwaring, ‘Permission to worry you, sir.’ No one needs to ask permission to worry me – it’s happening anyway – which is why I was intrigued by Francis O’Gorman’s new book Worrying: A Literary and Cultural History which I reviewed here. This book seems to be part of a growing field that might be called the cultural history of emotional states. The process of worrying perfectly suits the long essay form to which the book belongs, with its self-questing exploration of the mind’s idiosyncrasies. As in the best essays, O’Gorman’s riffing on a single topic becomes a way of exploring wider questions about life, the self and being human. ‘Worry’s favourite shape is a circle’, he writes.

Worries are also interesting because they are both real and fabricated. ‘It is … easy to forget that worries are imaginative creations, small epics of personal failure and anticipated catastrophe,’ writes Adam Phillips in an essay on the subject that O’Gorman doesn’t quote. ‘They are, that is to say, made up.’ Some of us just have worrisomeness in our bones. John Self reminded me of a brilliant line in Gordon Burns’s Best and Edwards in which he describes Bobby Charlton’s face as one ‘on which worry – more accurately worritability, the under-colour of worry – seems to have been permanently imprinted’.

‘The suburb always has an abstracted quality, like a sentence learned by heart and repeated till the words are finally magical … The suburb has its own patterns: arrangements of bottles on front steps and scraped ice on driveways, enactments of chores and duties, conversations at gates and hedges, sweeping and binding movements, arcane calculations of cost and distance. All this activity is intended to make it appear real – a commonplace – but its people cannot evade the thought, like the thought which sometimes comes in dreams, that nothing is solid at all, and the suburb is no more substantial than a mirage in a blizzard, or the shimmering waves off an exit road where spilled petrol evaporates in the sun.’ – John Burnside, ‘Suburbs’

John Cheever turns out to be brilliantly prophetic on the changing nature of the queue in daily life:

‘The time of which I’m writing was a time in our history when the line or queue had been seriously challenged by automation, particularly in banks. Customers were urged by newspaper advertisements, television and mailings to make their deposits and withdrawals by inserting cards into responsive machines, but there were still enough men and women who had mislaid their cards or who were so lonely that they liked to smile at a teller to form a friendly line at a bank window. They were of that generation who imagined there to be a line at the gates of heaven.’

And he is lovely on the lonesome etiquette of the winking car indicator:

‘He felt so lonely that when the car ahead of him signaled for an exit he felt as if he had been touched tenderly on the shoulder by some stranger in some place like a crowded airport, and he wanted to put on his parking lights or signal back in some way as strangers who are traveling sometimes touch one another although they will never, ever meet again. In a lonely fantasy of nomadism he imagined a world where men and women communicated with one another mostly by signal lights and where he proposed marriage to some stranger because she turned on her parking lights an hour before dusk, dislosing a supple and romantic nature.’

I’ve just read A Doctor’s Life: The Diaries of Hugh Selbourne MD 1960-63. Published in 1989, these diaries record the life of a consultant doing the rounds in hospitals in the Lowryland of Hyde, Ashton and Glossop (my hometown, which is why I was drawn to it). Along with stories about his patients and his own life, Selbourne includes terse and occasionally tetchy notes of his TV watching. They are a reminder of how much of television’s past is now forgotten, of the surreal juxtapositions that television creates, and of the often erratic reactions of its viewers.

August 4 1961: ‘Watched “Tonight”: hairstyles amongst the native Indians of Ecuador, and a discussion on “New Town Blues.”

January 24 1962: ‘This evening watched Harold Macmillan on TV. He made an empty speech, full of platitudes and drivel.’

February 18 1962: ‘Watched “Face to Face”, John Freeman interviewing Cecil Beaton, who looked to me like a homosexual psychopath, but whose intelligence was a modicum above the average.’

December 10 1962: ‘Malcolm Muggeridge interviewing Maurice Cornforth, a Marxist, who made a complete fool of himself.’

‘What then shall I do this morning? How we spend our days is, of course, how we spend our lives. What we do with this hour, and that one, is what we are doing. A schedule defends from chaos and whim. It is a net for catching days. It is a scaffolding on which a worker can stand and labor with both hands at sections of time. A schedule is a mock-up of reason and order – willed, faked, and so brought into being; it is a peace and a haven set into the wreck of time; it is a lifeboat on which you find yourself, decades later, still living.’ – Annie Dillard, The Writing Life (1989, p. 32)

The German-British sociologist Norbert Elias, after retiring from the University of Leicester in 1962, spent the rest of the decade travelling round Europe. In the late spring of 1965, while ambling round a small fishing village in Torremolinos, he heard a woman shouting after him. ‘Then a little girl approached me laughing,’ he later wrote, ‘but hid her head, and was running back to her mother … Finally I understood through an older girl; she pointed to my shoes, where the left shoe-laces were untied and trailing.’ As Elias thanked her and did up his laces, he noticed that people around him were nodding and murmuring approvingly, as if he had corrected something about his appearance that was disturbing to the social order. He felt that by retying his laces he was being welcomed back into the community of respectable human beings.

One of the little experiments he undertook to amuse himself over the next year or so was to go round various European cities leaving his shoelaces untied. Harold Garfinkel, in his Studies in Ethnomethodology (1967), called this a ‘breaching experiment’. This is an ethnographic exercise which examines people’s reactions to the breaking of social norms that we normally take for granted. The irritation and/or embarrassment this often causes can tell us much about hidden cultural assumptions and values. ‘I cannot help it: I am fascinated by the people, their differences, their behaviour, their way of life,’ Elias wrote.

He published his research results in a brief article in Die Zeit in November 1967, titled ‘The story of the shoelaces’. It came to light only quite recently when publicised by Ingo Mörth, a professor at the Johannes Kepler Universität in Linz, Austria, in the June 2007 issue of Figurations: The Newsletter of the Norbert Elias Foundation. In England, Elias found, ‘mostly elderly gentlemen reacted by communicating with me on the danger of stumbling and falling’. In Germany ‘older men only looked at me somewhat contemptuously, whereas women reacted directly and tried to “clean up” the obvious disorder, on the tram as well as elsewhere’. In Switzerland, Elias found that his untied laces sparked up many conversations, not just about the dangers of untied laces but the perils of eating grapes and travelling on trains as well. In France he got little reaction: no one cared about his or anyone else’s shoelaces.

As someone who is very bad at tying his laces, so that they come untied easily, I can confirm Elias’s experimental results: leaving your shoelaces untied is a source of constant comment and advice from strangers. There is always a little part of me that feels I am being admonished personally, as I associate my poor tying of laces with some aspect of my personality, particularly my tendency to freeze up in conversation and trip over words as though they were shoelaces (although, oddly, I very rarely trip over my shoelaces).

Well into adulthood I did not know the approved method of tying laces, having been taught a special method off my brother when I was little, which in hindsight I would have to concede was flawed (the laces kept coming undone). I suppose I also (perhaps unfairly) associate excessive shoelace tying with passive aggression, as in John McEnroe’s old trick of tying his shoelaces during games rather than between games to put his opponents off. Well, health and safety be damned. I claim my right as a freeborn Englishman to leave my shoelaces untied occasionally. Let us set a thousand shoelaces free, trailing behind us like free spirits and endangering no one but ourselves.