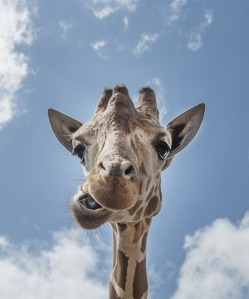 In the BBC children’s programme Animal Magic, which ran from 1962 to 1983, there were filmed inserts, shot at Bristol Zoo, in which the presenter Johnny Morris played a zookeeper. Morris would also impersonate and voice the animals, who acquired names and personalities – Christina and Wendy the elephants, Dottie, the French ring-tailed lemur (named after Dorothy Lamour), Lucy the llama, Brolly the umbrella cockatoo, and so on. Morris gave each animal human traits: giraffes were patrician aristocrats, sea lions were crusty old generals, llamas looked down their long noses with a withering sense of superiority. The Natural History unit was always uneasy about this anthropomorphism, which may have contributed eventually to the show being cancelled, much to Morris’s dismay.

However, I discovered while writing my shyness book that the study of ‘animal personality’ – an oxymoron, surely, because only a person can have a personality? – is a flourishing field. One of the central concepts in this field is what is called the ‘shy-bold continuum’. In all animals (perhaps including humans), so the theory goes, there is a trade-off. We have to be bold in order to find food and reproduce (very important), but also cautious and risk-averse to avoid being eaten by someone or something else (even more important, perhaps).

The serious scientific study of evolved shyness in animals began with the domestic dog. One study conducted in 1944 found that out of 178 dogs bred in a laboratory at Cornell University, 46 per cent were shy and unfriendly, in spite of all attempts to befriend them. They traced this back to the influence of a very shy Basset Hound brood bitch called Paula, known as a bad ‘fear-biter’, who had produced a third of the puppies.

The study of animal personality proceeds by neat and nifty little experiments. Anne Hedrick, a biologist at the University of California, Davis, collected male field crickets from a football pitch and divided them up according to the length of their trills. When she rehoused them in laboratory terrariums, the long singers took longer to venture out than the short singers. They were offsetting the greater risk of long singing with greater shyness. Meanwhile, the marine biologist Mark Briffa, studying anemones along the Devon and Cornwall coasts, used a small jet of sea water to trigger their ‘startle response’, causing them to retract their tentacles, and then measured how long it took for them to return to a normal state. He discovered, of course, that anemones showed differing levels of shyness and boldness.

The shy-bold continuum has now been found in hundreds of animals: western grass spiders, limpets, water striders, sharks, great tits. That certain animals are ‘shy’ has of course been known for centuries by the humans who try to catch them. ‘Fish have temperaments various as their captors: they are shy, bold, cowardly, volatile, sulky, or determined’, wrote William Peard in A Year of Liberty: or Salmon Angling in Ireland in 1867.